Say Yes to Asking for Consent: A Terrace House Story 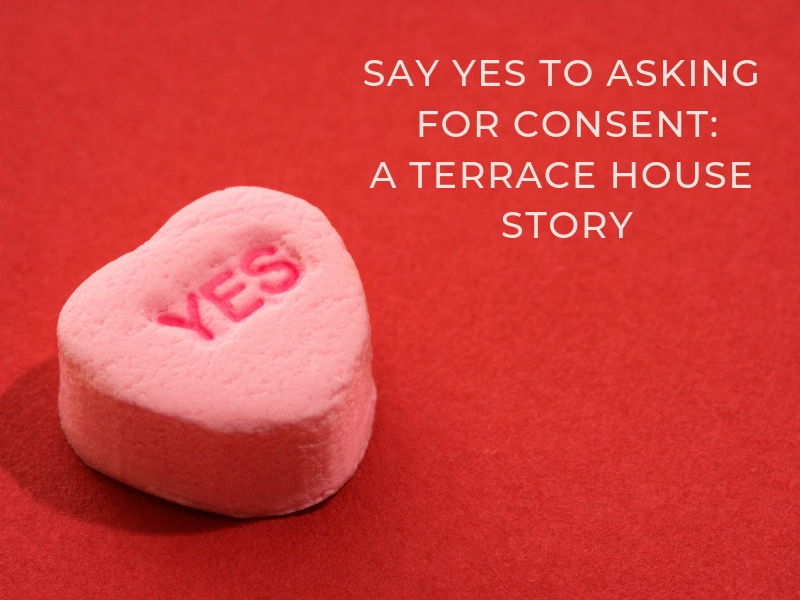 Whether if it’s to give someone a hug, kiss, or simply if you can pet their cat, asking for consent is always important. A lot of people worry it’ll ruin the moment or that it’s unattractive. But you know what’s worse? Crossing someone’s boundaries and making them feel like crap.

Take what happened on Terrace House: Opening New Doors. For the uninitiated, Terrace House is a slow burning Japanese reality TV show. Three men and three women live in a beautiful house and we, the viewers, watch them live their lives. To be honest, most of the time they’re just having mundane conversations, cooking, and going out with each other. Maybe it’s the chemistry between the participants that draws me in, or the fact that they lead interesting lives. It might not be your jam, but it happens to be mine.

In any case, there was one episode, “Kiss Out of Nowhere”, that really grinds my gears.

A woman, Seina, and a man, Shohei, were out on a date (they had gone out a few times beforehand). As their date neared its end and they waited for a cab, Shohei puts his arm around behind her shoulders, wraps his arm around her neck into a headlock, and pulls her in for a kiss. She is clearly very surprised and not in a good way. They proceed to get in the cab where it’s reported that he keeps kissing her. She doesn’t initiate any of the kissing. Cue disgust here.

This is not okay, at all! Putting women in a surprise headlock and kissing them is creepy and borderline assault. Of course there’re some women who would be completely okay with this, but asking for consent beforehand, which didn’t happen, is mandatory.

It’s vital that you discuss with your partner or potential partner what they’re into before trying to put them in a headlock (are words I didn’t think I’d ever have to write). You should also take into account non-verbal cues which includes, but aren’t limited to, body language, current level of sobriety, and their mental and physical presentation. It might feel strange at first to ask because society does a pretty good job of perpetuating toxic masculinity and rape culture, but trust me, it’s way sexier and safer to ask for consent.

← Fifty Shades of Feminism
ICYMI: The Transformation of the Asian-American Vote →

2 Comments on “Say Yes to Asking for Consent: A Terrace House Story”