This month Women’s Caucus celebrates Pride with the LGBTQ+ community.

Pride month is a celebration of the resilience and dynamism of the LGBTQ+ community. It marks the anniversary of the Stonewall Riots, when in 1969 police raided the Stonewall Inn in New York, and the LGBTQ+ community rose up. Fighting against a lifetime of oppression, they fought for their lives, liberty, and equality. There is perhaps nothing more brave or American.

In 1970, the first Christopher Street Liberation Day March was held. A somber march of solidarity and remembrance from Greenwich Village to Central Park, participants held signs and chanted, “Say it clear, say it loud. Gay is good, gay is proud.”

“The Stonewall riots changed the direction of the gay movement, taking it from several independently run nascent organizations sprinkled throughout the country to becoming a full-fledged national social equality movement that people could identify with and organize around.” –Photos: Remembering the Birth of Pride, The Advocate

Other commemorative marches appeared across the country. In Los Angeles, the first city-sanctioned ‘parade’ was held with street closures and permitted parade route. In 1974, LA would add the first festival component. The threat of violence during and after the marches was palpable; however, the solidarity and refuge fostered by the courage of the marchers birthed a tradition of vibrance and strength.

At our upcoming meeting this month, we warmly welcome the LGBTQ+ Caucus and look forward to an engaging presentation by the Co-Chair, Robbie Platt, on the history of our niche group here in London, the struggles the community faces today, and what action we can take as allies and friends.

At the heart of the Pride Movement is a hunger for authenticity and acceptance. So, this month as we honor the history and spirit of Pride, let us practice genuineness in our lives and in expanding our tolerance, and focus on the hope of our collaborative activism. 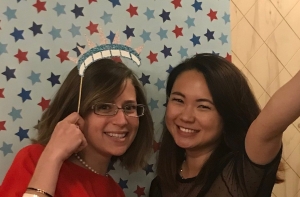 ← She Should Run: Winner of May’s Member Spotlight
Because of Her →